The men’s and women’s teams of the “Selección Nacional de Baloncesto” represent Costa Rica in international tournaments. Players are drawn from the best of the country’s First Division teams.

Costa Rica competes primarily against other Central American and Caribbean countries. In 2016 the men’s team placed second only to regional powerhouse Panama.

The women’s team has gone even further, finishing third place in the CentroBasket tournament, which involves Mexico and every country in Central America and the Caribbean.

“The biggest achievement in Costa Rica has been with women, reaching a pre-World Cup qualifier,” said Alvaro Calvo, president of the Costa Rican Basketball Federation.

Costa Rica has no professional league, but it has seven scrappy First Division men’s teams, some considered semipro, that are open to all ages and compete from February to September.

In addition to the First Division, there’s a “Liga de Desarrollo,” or development league, with a maximum age of 24.

In women’s play, there’s one major league, open to women of all ages. There are five teams:

Minor-league basketball is open to youths from ages 8 to 19, and there are as many as 215 teams. Here the future talent of Costa Rican hoops develops and trains.

“That’s been our strong point,” said Calvo. “That’s the main thing we’ve dedicated ourselves to, the training of players at this level. We’re working very hard on the minor leagues, on regionalizing basketball and training players and referees.”

Basketball was invented in 1891 in Springfield, Massachusetts, by a Canadian physical education instructor named James Naismith. The original game was played with peach baskets and soccer balls, and after a point scored the janitor had to climb a ladder to retrieve the ball.

Fourteen years later the game arrived in Costa Rica, according to a brief history published by the Costa Rican Basketball Federation (http://www.fecobacr.com/historia/). In 1905 the Liceo de Costa Rica, the country’s main high school, hired a phys-ed professor from France named Gustavo Michaud. His trip to Costa Rica brought him through the United States, where he was introduced to the game. Michaud brought it to Costa Rica and taught it to his new students.

Students at the Liceo picked up the game with interest, and it soon spread to other parts of the Central Valley. Between 1916 and 1917 the first informal competitive matches were organized, and in 1922, at Salón Betty High in Barrio Amón, the first “official” games were played.

When the National Stadium was inaugurated in 1924, a wooden court was added in the middle of the soccer field for basketball. Here an exhibition game was played between Costa Ricans and the Panamanian team “Wailing Hall” — the first international basketball match in Costa Rica.

Women’s basketball was first organized in 1928, and in fact a legitimate star named Avis McClean soon emerged. Women’s teams competed in other countries in the 1930s and 1940s, and 1935-40 has been called the “Golden Age” of women’s basketball in Costa Rica.

The Costa Rican Basketball Federation was founded in 1937 to organize international matches. Several men’s and women’s teams existed, and some had begun to recruit international players, including the Panamanian female star Delmira Pierce, known as the “Cyclone of the Caribbean.”

The ’50s were considered the “Golden Age” of men’s basketball, with teams gaining international experience in Mexico, Cuba, El Salvador and Ecuador. In the ’60s the game gained great popularity with the construction of a National Gymnasium built specifically for basketball.

Nowadays you can find open-air courts in many public parks, with local youths playing pickup games. NBA games are followed with interest in sports bars, and some local TV stations televise regional games live. And if the national team busts a move on the international stage, you’ll hear about it on the news.

Costa Rica Sports Tours would be happy to host your team in our beautiful country, offering a new perspective on a familiar sport. We’ll arrange all the lodging, meals, tours and matches, introducing our guests to the best this country has to offer. In the process, we will help you bring out the best in your team.

Get A Custom Quote >

Costa Rica is a tiny basketball country where the players have a huge heart for hoops.

“I believe it’s a privilege and I also believe it’s an obligation as a Tica to go and give your best for your country,” said Gabriela Alvarado, who is only 5-foot-4 but made the under-12 national team when she was just 10 years old, before she even knew how to dribble.

“I can’t tell you how much pride I feel every time they call and say, ‘Hey, can you come play?’” said the feisty shooting guard, who at 33 still represents her country in international tournaments. “As long as my work doesn’t interfere, I’m going to be there every time.”

There are currently seven First Division men’s teams and five women’s teams in Costa Rica, and the best players from these are chosen for the Selección Nacional, the national basketball team, for each gender. Daniel Simmons, the men’s coach, described some of the teams as “semipro,” meaning they pay some of the players a small amount of money, or else support them with shoes, uniforms or travel allowances. 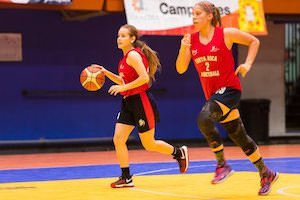 Alvaro Calvo, president of the Costa Rican Basketball Federation, said: “We’re going through an interesting process of promoting the sport. We’re working very hard on the minor leagues, on regionalizing basketball and training players and referees.”

Calvo said that in the minor leagues, with players ages 8 to 19, there are an astonishing 215 teams in the country.

“That’s been our strong point,” he said. “That’s the main thing we’ve dedicated ourselves to, the training of players at this level.”

The men, meanwhile, have won the Central American championship a couple of times, though it’s tough to defeat Panama, in part because it has American players on its team (as do Mexico, Puerto Rico and the U.S. Virgin Islands). For the women’s team, the toughest opponent is typically Guatemala.

Isaac Conejo, 24, the 6-foot-2 point guard for San Ramón, was named player of the week after that game for tallying 15 points, 11 rebounds and 16 assists. Isaac’s father, Gabelo Conejo, coaches the goalkeepers for the national soccer team, including Real Madrid star Keylor Navas. Isaac’s mother used to play for the Costa Rica women’s national basketball team, and Isaac told me he tried soccer but didn’t like it, so he went into basketball.

“I can be pretty calm when the game is really heated,” said Isaac, when I asked him what his strengths were as a player. “I can drive pretty good. I’m not the best shooter but I can find my teammates. I’m more like a passer.” 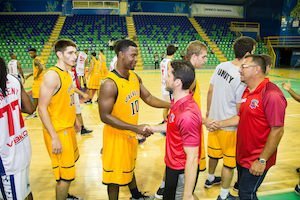 All of these teams, meaning the 12 First Division men’s and women’s teams and the two national teams, have played friendly matches against teams from the United States visiting Costa Rica to engage in “sports tourism.”

I asked Isaac what it’s like when U.S. college teams come to Costa Rica to play against “the happiest country in the world.”

“First of all, they’re going to like the country a lot,” he said. “And after that, we’re going to give them a headache playing against them. We get really competitive when we play against a team from another country.”

Still, he admitted that when Georgia Tech came down and played against both San Ramón and the men’s Sele, the Ticos got spanked pretty bad.

“Two of their players are in the NBA right now,” he said. “It was pretty cool to play against them.”

“We have played against a lot of teams that come here,” Gabriela said. “We use them to practice our offense and our defense. Those games are very useful to us. We’re always open to practice against them because they play at such a high level.”

“It’s always a good opportunity for us,” said Natalia Galvez, the 5-foot-6 captain of the national team and of Coronado (and wife of coach Cristian). “It makes us work harder and play harder, because we always play against the same people. Costa Rica is so small, so playing against them is great.”

“I believe we have a beautiful country, and I know we can find the union between sports and tourism,” said Gabriela. “So they can go to volcanoes, they can get to know our culture, they can do a lot of things as well as playing the sport that they love.”